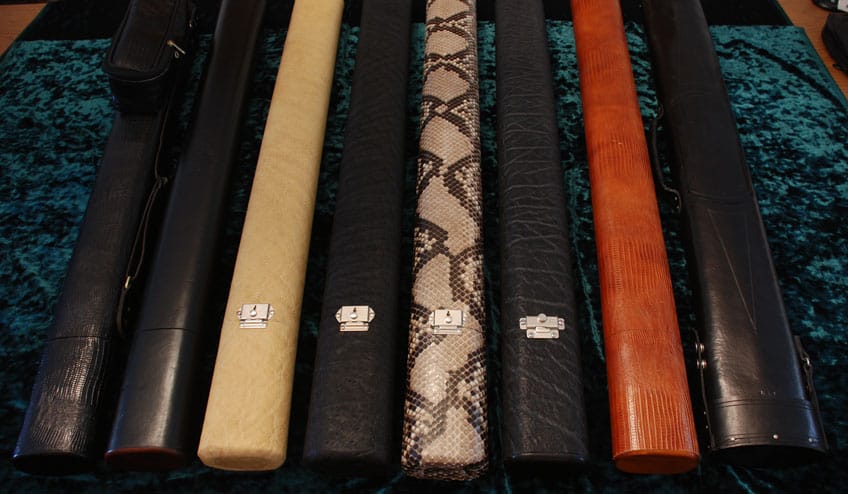 ​CueAddicts was an idea created by Sean Brown, Matt Conerly, and Jeff Horton of Chattanooga TN in 2000. We wanted to offer a web presence for our cue collecting obsession and also to spurn interest in the hobby itself. We wanted to present cues in a very detailed, honest, fair, and constructive manner. Later that year we teamed up with long time dealer Scott Murphey from Houston TX and began offering some of his cues on our website, cueaddicts.com.

For the next decade or so, we exhibited regularly at the Super Billiards Expo and Derby City Classic as contributing vendors. Over the years we have handled many thousands of cues, from production to ultra high-end custom. As we have gotten pulled in other directions, we have continued to buy, sell, and trade cues but not to the degree as we did before. We will maintain this site as a way for people to reach us. It may not be updated with current stocks, but as always, feel free to email or call.

Why am I a collector?  Many people have been indoctrinated into the realm of custom pool cues and find themselves hooked after a relatively short time.  Why is that?  Maybe other people have pondered this, too....I know I have.  It seems that, first, you need to have a deep love for the game, but then what?  What takes someone over the threshold of simply having a few playing cues into having more and more.  Sometimes more than you could ever realistically use.  Who knows exactly, but if you find yourself in this spot, it can certainly be an adventure.

In my mind, a “collector” may simply start out with what visually appeals to them.  It can develop into focusing on a particular brand or maker's work, a particular style or theme of cues....i.e. "box" inlay cues, "tuxedo" or black and white cues, burl wood cues or other particular species, reverse splice, wrapless, Bushka style, antique/vintage only, etc.  Sometimes a collector will focus on a particular line of cues, usually production cues, like the McDermott B, C, or D-series, Schön S or R-series, or the Palmer catalog lines from the 1960s and 70s.  Whatever path you choose, my advice would be to try to experience a lot of variety and become as educated as possible.  Learn some about how cues are made, learn about the various machinery and methods, familiarize yourself with the multitude of designs and materials, and whenever possible, spend some quality time with the (sometimes eccentric) makers behind these beautiful cue sticks we all cherish so much.

Myself, I’ve been collecting cues since the early-mid 1990s.  For years I was a league player and was introduced to the world of custom cues by a close friend and fellow player.  The first real customs I had an opportunity to play with were made by Richard Black, Bill McDaniel, Leonard Bludworth, Tim Scruggs, and a few by a guy with a rather unusual name....Szamboti or something like that. :)  The hand-made qualities and differences in each immediately sparked my interest, as well as a much harder, crisper hit, which is something I prefer but was unable to find back then in off-the-shelf production cues that were available in our area, like Meucci, McDermott, and Viking.

Collecting didn’t happen overnight for me, though.  It took a few years for the ‘bug’ to really set in.  Over that time I attended some PBT tour events and several regional tournaments in the southeast where I was able to meet some of the top pros, as well as several cuemakers.  It soon became clear that I would need to attend the Super Billiards Expo in Valley Forge, PA.  By all accounts, it was “the place to go" to see the most amazing cues.  Well, everyone was certainly right!  I attended my first SBE in 1998 and was hooked.  By that time I had a modest collection going and had already begun feeding my interest for a few years with mail flyers and a some purchases from guys like John Wright, Keith Walton, and Mark Kulungian.

Now, after many years, a ton of deals, and of friendships, I find myself still gravitating toward the clean, classic works of guys like Szamboti, Balabushka, Petersen, Gilbert, Scruggs, etc....4-point, veneered cues with little or minimal inlay work.  Those were the styles I first came to really appreciate and that’s definitely where my heart and ‘collecting eye’ seems to firmly reside.